Crazy weather and the butterfly effect on inflation

It seems that the wettest “summer” on record in England is not only playing havoc with the M&G cricket team’s schedule, it is also having a massive impact on the nation’s butterflies. Sir David Attenborough is asking people to participate in the world’s biggest butterfly survey – The Big Butterfly Count – to see how the butterfly population has fared after all the wet weather we have been having. So get out in your garden and see how many butterflies and moths you can count in 15 minutes – counting butterflies has been described as “taking the pulse of nature”.

It should be noted though that England is not the only country that has been experiencing adverse weather conditions. In the US there have been wildfires in Colorado, a heatwave across the eastern seaboard, and a “super derecho” which caused mass destruction from west of Chicago to east of Washington, D.C. Russia has experienced flash flooding in the Krasnodar region and the drought experienced in southern Russia has expanded into western Ukraine and southeastern Europe. 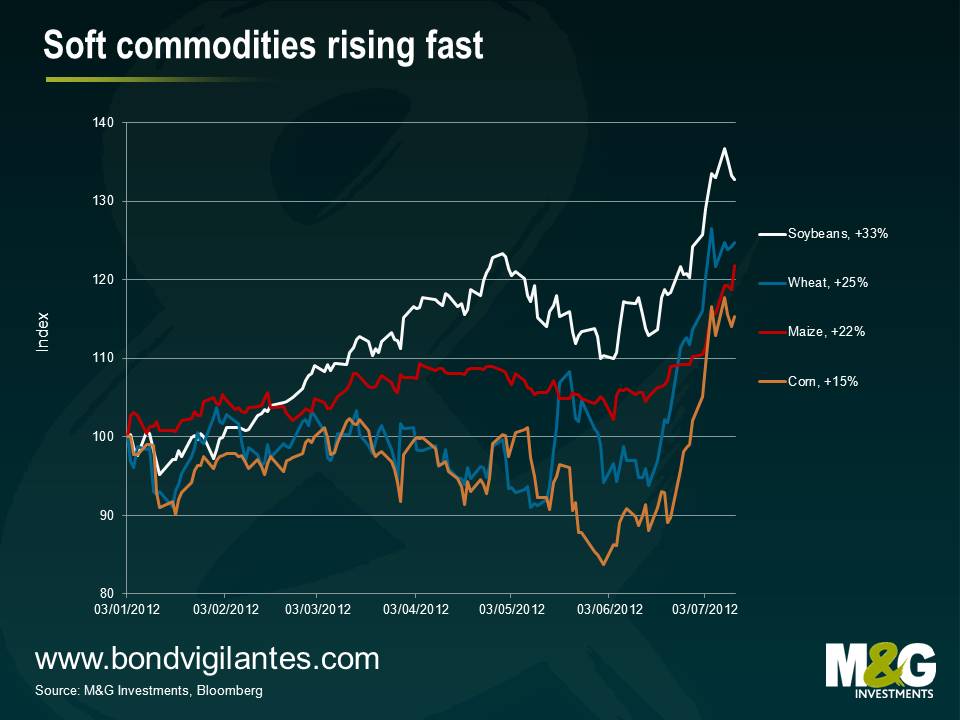 Of course, higher food prices means higher inflation numbers. In the UK, food makes up 11.4% of the RPI index and 9.8% of the CPI index. In Europe, food makes up 13.9% in the HICP. In the US, food is 14.2% of the CPI. The recent price increases for soft commodities are currently not expected to result in higher overall inflation.

That said, if we do get some pass-through, central bankers would tend to describe the increase in inflation as temporary. Central bankers prefer to look at “core” measures of inflation that exclude potentially volatile categories like food and energy. Mike recently wrote that the state of the global economy is quite poor, so it is more than likely that the central bank authorities will describe any increase in inflation as temporary and that real economies remain weak. We have been describing central bank regime change for a while now, and it appears clear to us that central banks aren’t really all too fussed about inflation anymore. It’s all about unemployment and debt.

However, inflation affects everyone. We can debate whether this is fair or not, as the average consumer doesn’t exclude food and energy from their basket of goods, but rising food prices are arguably an even bigger issue in EM countries. The following chart highlights the weight of food in the inflation basket across the continent of Europe. For EM countries like Romania (29.7%), Turkey (24.3%) and Lithuania (23.6%), the food bill is a substantial amount of money to the average citizen of these nations.  In China, the weight of food is close to a third and in India it is almost half. Many of these countries are currently embarking on monetary policy easing and if food inflation continues for a sustained period of time, then this could put these policy easing plans at risk. As I mentioned last year, the  Food and Agriculture Organisation (FAO) of the United Nations is a great source of information on agricultural production and the outlook for food commodity prices. And as I said last year, their agricultural outlook does not make for comforting reading. The chart below shows their nominal price forecasts for crops, livestock and fats out to 2021. There is a continued increase in commodity prices particularly for oilseeds, beef, and fish. The FAO highlight that the key issue facing global agriculture is how to increase productivity in a more sustainable way to meet the rising demand for the “four F’s” – food, feed, fuel and fibre. It is forecast that agricultural production will need to increase by 40% over the next 40 years but total arable land will increase by only 5%. Increasing productivity and developing new technologies will be crucial. So keep an eye on those butterflies. They could very well be a leading indicator to food prices and inflation outcomes.