The perpetual bond market in Brazil is misrated

In developed markets, the vast majority of perpetual bonds are contractually subordinated, i.e. it is stated in the bond documentation that they are junior to any senior secured or unsecured debt, and as a result they tend to have lower bond ratings than senior bonds in the same capital structure because they have a lower expected recovery value. In emerging markets, however, it is not uncommon to see senior unsecured perpetual bonds. Brazilian corporates, from construction company Odebrecht to national airline GOL, have sold perpetual bonds in the past decade fuelled by investors’ appetite for yield and in order to secure long-term financing. In most cases, these perpetual bonds are contractually pari passu with other unsecured unsubordinated indebtedness of a same issuer. What developed and emerging markets have in common is that the seniority and ranking of a bond does not depend on its maturity date; two senior unsecured bonds with different maturities but same indenture will have a similar bond rating.

A case in point is GOL, the Brazilian airline, which issued $200 million worth of GOLLBZ 8.75% perpetual bonds in 2006. This bond had similar ranking and guarantees* than the later-issued fixed-maturity GOLLBZ 7.5% 2017 senior unsecured bonds. As a result, the rating agencies in 2007 assigned a similar bond rating to both instruments (Ba2 by Moody’s and BB+ by Fitch), assuming their probability of default and recovery value would be similar. While on paper this looked sensible because Brazilian judicial restructuring states that each class of creditors must be treated equally, the economic downturn in Brazil has proved this approach to be, in my view, the least conservative for bond-investors.

Starting in 2012, GOL experienced significant macroeconomic headwinds (recession and currency depreciation) which resulted in lower demand, industry overcapacity and financial troubles for one of Brazil’s largest airlines. Rating agencies downgraded GOL’s bonds in line with its credit profile deterioration and the perpetual unsecured bond rating was again similar to other fixed-maturity unsecured bonds. In May 2016, Gol’s liquidity position and balance sheet became unsustainable and the company launched a restructuring proposal. The private restructuring offered bondholders an exchange of their existing bonds into a small portion of cash and into newly issued bonds. However, while the senior unsecured bonds with maturities between 2020 and 2023 were all treated equally – the proposal was a debt haircut of about 45% at best – the senior unsecured perpetual bondholders were offered much worse terms with a debt haircut of 55% and full exchange into new bonds with no cash consideration.

The shorter-dated GOLLBZ 7.5% bonds due in 2017 received the best treatment with a debt haircut of about 30%. Even the early participation fee granted to bondholders for accepting the offer was less attractive (not in cash) for the perpetual bonds. Therefore, the recovery value of the perpetual bonds was below the one of the senior unsecured bonds because the restructuring proposal did not respect the contractual ranking and guarantees of the various bonds but rather applied treatment based on the maturity of the bonds. 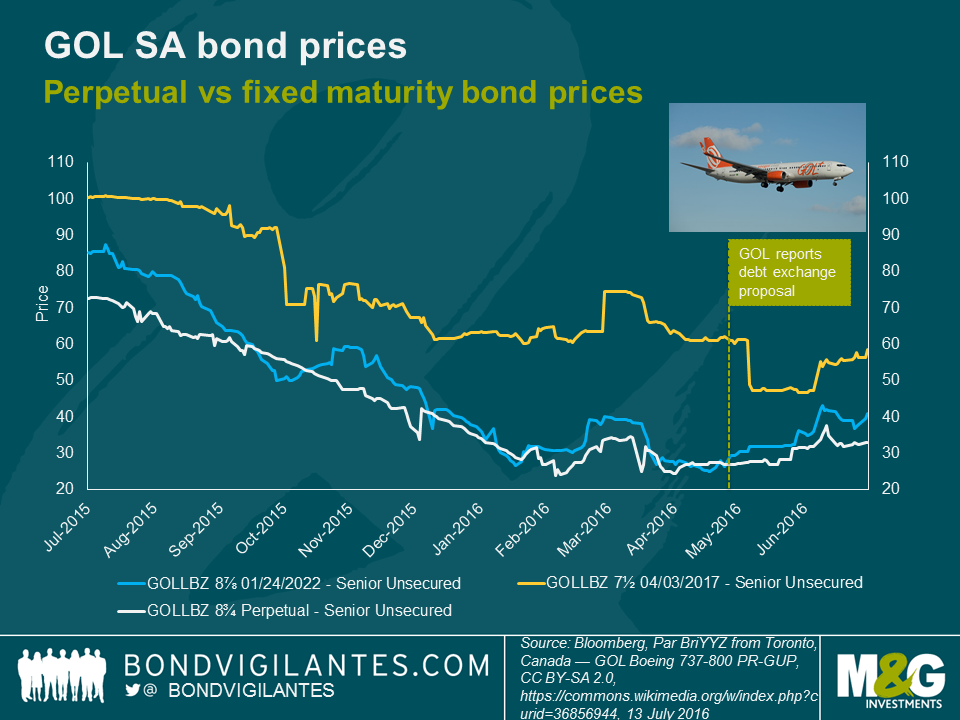 Rating agencies seem to have taken note of the above, although arguably that was too late for bondholders. On 5 May 2016, a couple of days after GOL’s debt exchange was offered, Moody’s changed their view and decided to downgrade the perpetual bond rating to C from Caa2 while the fixed-maturity bond due in 2017 was downgraded by only one notch to Caa3 from Caa2. Moody’s stated: “The 2017 senior unsecured note is now rated at the same level (as the company’s issuer level), given its expected recovery rate, while the Perpetual notes is rated C, given its lower expected recovery rate.”

GOL’s case has significant implication for the rest of the Brazilian perpetual bond market which to me appears overpriced and overrated. In general, in a non-distressed world average spreads for holding perpetual bonds in Brazil are somewhere between 50 to 200 basis points wider than 10-yr senior unsecured bonds but this is the spread rewarding the maturity difference (uncertainty of when bondholders will be redeemed) rather than the recovery value estimate. Maybe this is because most of the perpetual bonds continue to have similar ratings than fixed-maturity unsecured bonds. For instance, this is the case for petrochemical company Braskem’s perpetual bonds (Ba1) which nowadays trade 48bps wider than Braskem’s 2024 unsecured bonds (Ba1). In distressed credit, some perpetual bonds are even trading at cash prices higher than fixed-maturity senior unsecured bonds of the same capital structure. Construction company Odebrecht’s perpetual bonds (B2, watch negative) trade at 48 mid-price while Odebrecht’s 2025 unsecured bonds (ba2, watch negative) trade at 40 cents on the dollar. This makes little sense and it is unclear to me whether investors have priced in the fact that on paper these instruments are pari passu to other unsecured bonds but in practice are likely to be treated differently in a private restructuring.

Diligent holders of perpetual bonds in Brazil may want to notch down their bond rating internally and make sure they are getting paid for the risk they face, in particular in a country with elevated default rates and high likelihood of private debt exchanges in the next 12 to 18 months.